Apparently it's time to go back to Columbus.... In my never-ending raving about Jeni's, I share with you the BombeBastic
Posted by Green Peccadilloes at 10:04 AM 1 comment:

I had some odd eating habits at a kid. Who am I kidding? I have some odd eating habits now. I've kicked some of the stranger, unexplainable remnants of my childhood through my efforts to stop eating junk (hello bacon bits on cottage cheese ... don't ask, but it was a staple) but some remain or have experienced a limited evolution.

I never really liked oatmeal, except in one very specific preparation. I would eat Quaker Instant apple and cinnamon from the little packets. Only apple and cinnamon, nothing else was acceptable. Still, the texture and consistency of properly prepared instant oatmeal completely grossed me out, so I would make what I called oatmeal balls. I would use the tiniest amount of water possible to create minimal binding (I'm talking teaspoons) and stir the oatmeal so the little bit of mositure created a solid lump of oatmeal that really ended up rolled in dried oats. Any excess water so that the concotion was even remotely stirrable and the whole thing went right into the garbage.
I still don't like stirrable oatmeal and it's a dish I could never order at a breakfast joint for that reason. I do, however, recognize that a nice cup of oatmeal is a good, hearty breakfast and, even better, it's something I can prepare at the office. I'm not the type to be hungry when I first wake up, and I don't spend too much time in the house in the morning before jetting off to work, so breakfast has always been a challenge for me.
After lots of experiementing, I ended up with this basic solution: In one of the little disposable cups by the office coffee machine, I sprinkle in a bit of instant oatmeal. The 5 grain cereal I keep in my filing cabinet was an accidental purchase and it is not instant. The microwave instructions are bullshit too - it explodes on me every time. So now, lest I waste it, I add just a little bit of the 5 greain to the instant oatm 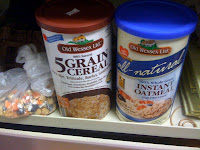 eal - maybe a 1:5 or 6 ratio. That way I'm getting some of the whole grains, flax seeds, etc along with the lower quality instant oatmeal. Then a scant handful of trail mix, nuts, raisins or whatever of that ilk I happen to have is tossed in. Sometimes I add a touch of salt if the nuts/fruit won't supply it. 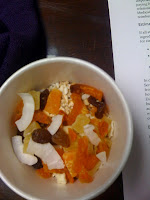 I very carefully stir the mixture (yup, there are dried oats on my office floor as we speak....) and walk back to the coffee maker for just a shot of hot water. I suppose you could actually add the appropriate amount of water, but then it's just really oatmeal with toppings stirred in, right? I much prefer my dense, grown-up oatmeal balls. Hey, it's keeping me away from pastry and bagels.
Posted by Green Peccadilloes at 9:46 AM 1 comment:

Happy New Year everyone! We jetted off to Northern California to ring in 2011 with friends who were getting married on New Year's eve. As most people were traveling long distances, the couple arranged for a block of beach homes on Bodgea Bay where we could all stay and spend time together pre-nuptials. Meals consisted of great pot lucks where strangers cooked and ate together, leaving as friends. Instead of a rehersal dinner, the night before the wedding saw the most robust of these meals, highlighted by plates and plates of fresh oysters and Dungeness crab. I wish I'd taken photos, but just close your eyes and imagine scores of oysters shimmering on a loaded dining room table, simply begging youto eat more than your share and you can come close to my joy. I may have missed the oyster pic, but here's a shot of the coast that made me smile as much as the slimy little buggers did. 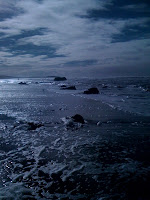 One of the contributions our house made was a cheese place comprised of delicacies from Cowgirl Creamery, just down the road from where we were staying. While out and about earlier that day, I'd also picked up some of their wares - a hunk of Mt. Tam triple cream that is (almost literally) worth its weight in gold, but worth every penny. Facing duplicates, we left one package of Mt. Tam at the house. Then, come breakfast, we realized there was no butter for our locally-made sourdough toast and the cheese served as a spectacular substitute. My heart may disagree, but can you really do better than fresh homemade toast piled high with rich, creamy artisan cheese? I haven't had a chance to check out our local cheese sources yet but you can bet my eye will be out for this stuff here at home. 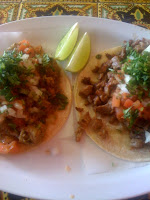 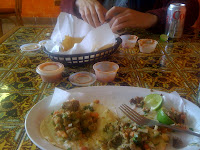 The wedding itself was at a winery in Santa Rosa. We had some time to bum around during the day and Western One was set on finding "real Mexican food." Thank you Yelp - we tracked down a fantastic little strip mall taqueria away from the touristy part of town. I think this might have been my first authentic taqueria experience.
I'm slowly learning why Western One is so discriminating - the food was outstanding. I had one carne asada and one chile verde taco, Western One went for carnitas, which he said was great. One taco was really two, so we were both stuffed and happy for less than $20.
I did, however, commit a cardinal sin. Sonoma county and no wine tour. I suppose my penance will need to be a return visit.
Posted by Green Peccadilloes at 11:41 AM No comments: