Although this has been obvious for quite some time, I've decided to put Green Peccadilloes to bed.  I've struggled for some time to keep up the inspiration to write new and interesting things and have just fallen short.  I have gained so much respect for the folks that can continue to write on a regular basis and have something to actually say.  It's very hard work.

This has been a fun experiment for the past two years and I've learned a lot, from writing, reading, engaging with those of you who were kind enough to read and from trying to stay creative.  The blog also served as an important outlet during some times when I really needed it.  So, many, many thanks to those of you who read what I had to say and offered input along the way.  It really was a lot of fun!
Posted by Green Peccadilloes at 8:28 PM 3 comments:

You won't catch me complaining about the chill in the air this week (that is, of course, unless my plants suffer as I think I was a little over eager with my basil...).  I've got chicken roasting in the over, a glass of red wine in my hand and am curled up in front of likely the last fire of the season with my pup.  Sundresses and white wine in March, sweats and red wine at the end of April.  There's something to be said for making the best of what you're given.
Posted by Green Peccadilloes at 7:29 PM No comments:

I did a lot of running around yesterday morning, trying to be as productive as possible while the weather was nice.  I was on an (unsuccessful) hunt for ramps, fearing I'm already too late.  There were none to be found at the Troy Farmer's Market so while I was working my way back to Albany, I decided to pop into the Fresh Market as a last ditch effort.  No ramps, but I did discover that the store is now carrying what is perhaps my very favorite thing in the world - Jeni's Ice Cream.  I know I'm rambled on incessantly about it here, and plenty of people in my life think I'm insane for shipping ice cream from Ohio, but it's just that good.  Especially the signature salty caramel flavor.

I stood in disbelief in the freezer section.  I may have exclaimed my joy out loud, I'm not quite sure.  For those of you unfamiliar with Jeni's, sticker shock is likely.  It was $10.99 for the pint at Fresh Market. I think it's $7-8 bucks at the stores, and by the time I have it shipped, $10 or $11 bucks a pint is about right.  Here's the thing - you don't eat a lot in one sitting.  It's so rich and satisfying that just a bit goes a long way.  I usually have about a ramekin full when I'm treating myself, so a pint has the potential to last.  Keep in mind, I said potential ...  Of course it's not an everyday treat, especially at that price point, but it is worth the occasional luxury.

So, I'm a very, very happy girl.  It's not every day you go searching for one delicacy and find another.  But if anyone has a lead on some ramps....
Posted by Green Peccadilloes at 10:20 AM No comments:

I've taken quite the hiatus these past few months.  I'm not really sure what I've been eating, but it certainly hasn't been anything creative coming out of my kitchen.  But Spring has a way of rejuvenating, doesn't it?  I've built new garden boxes, the basil and arugula are in, and happily my blueberry bushes are heavy with buds after last year's dud season. 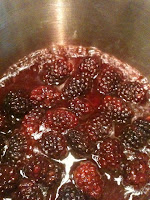 Last week I found myself on Long Island and took the long way home so I could swing by Trader Joe's (perhaps the last time I need to lug TJ's stuff back from Jersey?!).  I'd grabbed a jar of lemon curd, which I love but so rarely use.  Today, while out running errands, I spied a decent deal on plump, gorgeous blackberries and the stars aligned... 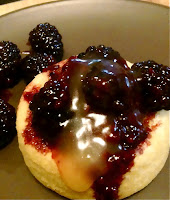 I decided to make a blackberry shortcake and top it with lemon curd.  I didn't want to just fill a shell with raw berries, so I used maybe a third of what I had to make a chunky sauce.  I started with just a little bit of water and brown sugar at a boil, dropped it down to a simmer and dropped the berries in.  Some freshly grated nutmeg, vanilla and about 20 minutes and I had a sauce.  I tossed in the rest of the berried, stirred them to coat and that was it.  I'd grabbed shortcake shells because they were handy, but I think this would be awesome on pound cake or homemade biscuits.


Happy Spring!
Posted by Green Peccadilloes at 5:48 PM No comments:

Brag about them and they shall come...

Exciting news as reported by Steve Barnes ... Penzey's is coming to town!  Granted, I do love ordering from them online because I almost always get an extra little treat in the package, but there's nothing like killing an hour wandering around a Penzey's brick and mortar store.

It's like my Christmas wish came true!  Now only if Jeni's would open a store here...
Posted by Green Peccadilloes at 3:23 PM No comments:

In addition to the ribs, I brought a simple smoked salmon crudite to out New Year's festivities.  I love these because they are so easy, yet pretty enough to look fancy.

This time I made my own french bread toast. And by made my own I mean I bought french bread, hit it with olive oil, and toasted it.  You can use any sort of toast or cracker though.  My only warning is to not prepare them too far in advance because the bread/cracker can get soggy.

It's really this simple ... mix cream cheese with a healthy dose of chopped dill - enough to really impart flavor and color.  Spread the mixture on the toast, stick some smoked salmon on top, and done.  I like to arrange the salmon in a way that allows for an extra dill garnish, making them look just a tad more polished.

Easy and yummy!
Posted by Green Peccadilloes at 4:48 PM No comments:

I actually had a stroke of inspiration the other day.  I was headed to my friends' place for low key drinks and appetizers on New Year's Eve.  These guys appreciate food and can cook, so I wanted to bring my A game.  While at the Asian Supermarket, I spied some ribs and the creative juices started floating.

I decided I wanted to make an orange-chile sauce for the ribs.  Full disclosure, I was only half paying attention and thought I was grabbing country-style ribs when really I just got the less meaty normal kind.  I'm looking forward to trying this with a meatier cut.

I browned the ribs off quickly, took them out of the pot and sauteed some onions and a package of roasted chilies from my freezer.  Then, I laid the ribs on top of the onions and peppers, added a touch of fresh-squeezed orange juice and let them cook very slowly for a few hours.

When it was time to crisp them up, I made a glaze by reducing orange juice, cayenne, honey, brown sugar and some of the juice that that had run off from the cooking ribs.  Careful with this step as the sugar can burn if you're not watching it.  When the liquid was reduced (and was super spicy from the concentrated pepper!) I drizzled it over the ribs (which I'd moved to a foil lined baking dish) and tossed them under the broiler.  Again, careful of burning sugar - I watched them very closely.

The sweet and spice worked nicely together.  I felt that I'd really achieved a coup when my friend said "I don't even like ribs and I ate three!".  It could have been the whiskey and prosecco talking, but I think we all enjoyed them.  The glaze was fairly easy to make and I would certainly try it again for different cuts of meat.
Posted by Green Peccadilloes at 4:46 PM No comments: