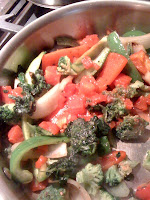 I've been very neglectful of Green Peccadilloes lately.  In all honesty, I've felt fairly uninspired and haven't spent much time in the kitchen, and when I do, it's nothing to write home about.  I've also been fighting this change of seasons bug or something for a week or two, which has had my palette all messed up.  I mean, who wants to hear about ramen and ice cream for dinner. (Although I know you all secretly love it too...)

Tonight I decided to get back on the horse and come up with a way to cram a whole bunch of vegetables down my throat in a last ditch effort to get back on track.  I figured some spice wouldn't hurt either, so I planned a thai red curry/vegetable dish over rice.  Easy to make and good for me.

Typically I just stir fry up some veggies, dump in some coconut milk and a healthy dollop of red curry paste and I have an easy, inexpensive, reasonably tasty dinner.  I'm often frustrated, though, because I only use about half of the can of coconut milk and the rest goes to waste.  What the heck do you do with leftover coconut milk?? I've searched for smaller cans to no avail.  One day I found a powdered version and was intrigued, especially as it's really only a vehicle for the curry paste.

I had some serious flashbacks to home ec while playing with the powdered milk.  Was it just my school that was super cheap and only used milk in a box when teaching kids to cook?  Unsurprisingly, the result was less than perfect and my sauce wasn't nearly as creamy as it normally is.  The flavor was fine though and the meal served its purpose.  I did feel better that I wasn't as wasteful, but it's certainly not something I'd serve to company.  Ah well - maybe I'll just keep searching for smaller portions of coconut milk that's actually hydrated.  Lesson learned.
Posted by Green Peccadilloes at 6:47 PM