It's always risky taking a new dish to a gathering.  It's especially risky when you're the new dish going to the gathering.  But, liking to plant my flag in the culinary prowess camp early with new folks, I faced the challenge head on.  And I - gasp - baked. 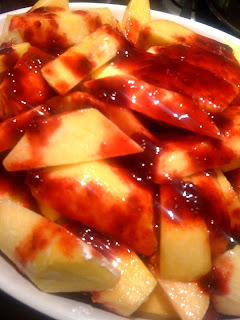 Those of you who read the blog regularly know I'm not one for recipes or measuring per se.  So baking and I have a touchy relationship, being that such things are important in baking.  I can, however, handle crisps and cobblers because other than remembering some proportions for the topping (and there's even some flexibility there) I get to play around a bit and usually not mess things up too bad.

I've done some mixed berry crisps before, but I decided to take a new spin - peach and blueberry crisp.  I had blueberries leftover from last season but I was a little worried about texture after so long in the freezer.  I decided to make a blueberry syrup - bit of water, bit more sugar and a nice slow boil and I was good to go.  I tossed the peach slices in a little sugar (less than normal because I'd sweetened the blueberries) and corn starch.  Then I drizzled the blueberry syrup over the peaches.  I was worried about how soupy the mix would be so I started to cook the fruit a bit before adding the topping.  When I was comfortable that it wouldn't be a total mess, on went the topping. 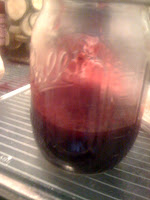 The crisp came out pretty good - a tad soupier than I would have liked but the flavor was good and my hosts were very gracious and seemed to enjoy it.  I even ended up with some extra blueberry syrup.  I sense some vanilla ice cream in my future!
Posted by Green Peccadilloes at 7:56 PM