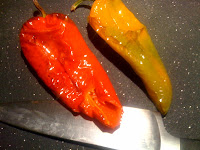 As chili season is rapidly approaching, I grabbed a handful of peppers at a farm stand recently and I've begun to build up my supply of roasted chiles.  I'm very much looking forward to chilly fall mornings, spending hours slowly building a flavor base for a big 'ole pot of chili and I learned last year that taking the time to roast my own chiles makes a difference.  However, if I can cut some time off a dish, I most certainly will and pre-roasting and freezing chiles is a great way to go.  I have a handful of packets of jalapenos already in this fridge and this was a mix of fairly tepid peppers.  I need to grab some gloves before playing with anything too spicy...I've learned that lesson before! 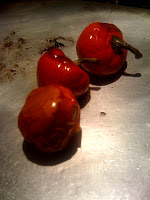 roast
The process, while sometimes time-consuming, is fairly simple.  Toss the peppers in some oil, throw them in a hot oven and away until the skin starts to pucker and blacken in spots.  If you're lucky like I was this go around, it will be fairly easy to separate the skin from the pepper with a sharp knife (I keep both my favorite chef's knife and paring knife handy).  Give the seeds a scrape - this is where the heat is, so adjust accordingly - and you're set.
Posted by Green Peccadilloes at 3:15 PM