My Dad is a hunter and while I often think "hunting" is code for "sitting in the woods for a little bit then drinking with your friends" he does on occasion bring something home. Although I've been making an effort to think more about where my food comes from, there is a line past which I don't really want to go. However, this year was a bit different, and I managed to listen to lots of dead deer stories and even peruse some pictures because my Dad scored a "once-in-a-lifetime" deer. A great, clean shot (i.e. the animal didn't suffer) and one big ass deer. So big, in fact, that some of the North Country locals have named it and while drinking beers after, Dad and friends had to chain it to the camp to prevent carcass theft. (Don't ask me, we're talking super North Country here...) 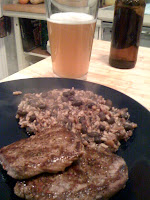 Anyway, the "Milebrook Monster" as it is known doffed ten points and weighed in at 240 pounds. Even a city-dweller like me knows that is, as I said before, a big ass deer. Said big ass deer provided us with A LOT of meat, which Dad kindly shared. For the longest time I swore I didn't like venison, but let me tell you, when cooked properly it is yummy yummy stuff.
We had some loin tonight. The meat was pre cut into thin steaks which Western One seasoned very simply with salt and pepper. A quick sear (I think he did a minute or so per side) in a hot cast iron skillet and the steaks were perfect. Medium-rare, juicy and not the least bit gamey. A simple black beans and rice dish on the side and he had a great meal. We still have some steaks, stew meat and sausage in the freezer so I'll have to figure out how to prepare some different cuts. While I don't see myself out field dressing a buck anytime soon, it was kind of nice to know, in no uncertain terms, exactly where my food came from.
Posted by Green Peccadilloes at 10:16 PM