I've apparently been sucked into the end-of-year cliche musings about days past. It's a chilly Saturday morning, I should be braving either the mall or the office, likely both, but instead I've been bunkered under the covers organizing photos.

Can't you just taste the summer?
My digital photo collection, with the exception of our big road trip this summer, largely consists of pictures of food and pictures of wonderpup. There are a few of Western One scattered in there too, lest he feel unappreciated. I've deleted a TON of food pics and still they persist. There are pictures of successes, failures, images for spectacular blog posts that I never got around to writing. 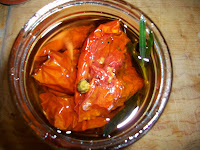 Oven-dried tomatoes from my friend the Tomato King
I can't help but wonder how many of those pictures represent an idea I tried so I would have something interesting to write about here, or a meal I forced myself to stay at home and cook instead of ordering take-out. I went back and read my very first post, and was relieved to see that I'd predicted some pitfalls on my road to more thoughtful cooking and finding a general balance in life. From its start back in March, I do believe this is post number 117 here on Green Peccadilloes. Some months were more prolific than others, and some posts were downright cringeworthy, but I'm getting there and most importantly I'm having fun and learning a lot. Thanks to all of you for making that the case.
Here are some of the dredged up images that made me smile this morning. I'll see if I can get my butt in gear and resurrect some of those "lost posts" soon! 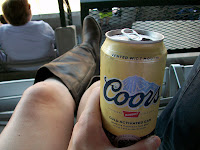 Just 'cuz the thought of cold beer
and cowboys made me smile
Posted by Green Peccadilloes at 8:25 AM