Wonderpup and I joined some girlfriends last weekend for good old fashioned car camping.  It was an easy and fun way to spend a few nights.  I contributed a bit to the cooking.  The night before we left I was up late making marinades from scratch instead of packing, a choice which led to yummy chicken but a very disorganized departure.  Ah well, we all have our priorities, right?  I did one batch of chicken in a pretty basic lemon, oil, pepper, onion, garlic and rosemary mix and another with beer and smoked paprika, with a few peppercorns thrown in. 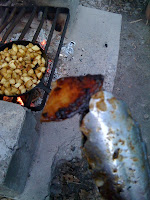 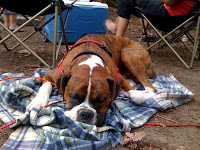 I also chopped up some potatoes I had in the house and tossed them in canola oil and a healthy dose of cayenne and chipotle pepper.  Maybe a tad too healthy a dose for the sensitive palates in the group (mine included) but even overly spicy nothing beats taters cooked to a nice crisp in cast iron over an open fire.  Regular readers may recall my potato troubles at camp last summer, but no issue this go around!

Wonderpup wasn't so sure about sleeping in a tent, but he sure loved having a blanket by the fire and the piece or two of hot dog he managed to score.
Posted by Green Peccadilloes at 10:04 PM