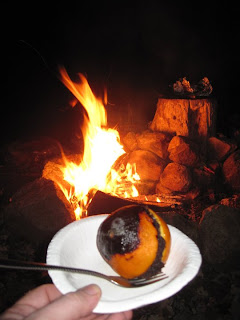 This post is a tad belated, as this little culinary adventure was developed at our camp earlier this fall, but I was sans camera both times we made it and it's just not the kind of thing you can write about without a photo. Many thanks to M&K for supplying this particular fire, photo and a great evening of conversation. Thanks to mother nature for the setting.
I'm taking credit for this, even though it is entirely based on a childhood memory of Western One's. He vaguely remembered making oranges filled with cake over a campfire as a kid back in the dark ages. But he was a kid and he didn't actually do it then, nor did he implement this time. I'll warn you now, this is a bit labor intensive, but if you do it right, you get some nice, fresh-squeezed oj out of the deal too. (which Western One used to make a fantastic fizzy orange tequila drink - will TOTALLY give him credit for that).
Basically, here's what you do: Halve oranges and dig out the orange. Ideally I suppose it would help to keep specific halves together, but I neither had the space nor patience for that at camp. You'll need to run a knife between the flesh and the skin, so don't drink too much before this step. Fill one half of an orange with cake mix prepared according to the instructions. We used white the first time, this picture is of our chocolate attempt, which was awesome. The batter can heap a little bit over the top, but not much. Place the second half of emptied orange on top and wrap tightly with foil. It helps to have an extra set of hands for all this. Ahem.
Stick the foil-wrapped oranges in hot coals/around the edge of the fire. Take care to keep them right-side up (as in, batter-filled half on the bottom) Crack a beer. Move the oranges around a little bit every now and then to cook evenly. Have more beer. After 30 min or so, they should be good to go. I'd say this is more art than science, so check a test orange. The cake will be moist and flavored with just enough orange essence. (which is why the chocolate was awesome). Is it the best cake you'll ever have? No, but it's certainly a fun campfire trick!
Posted by Green Peccadilloes at 5:48 PM