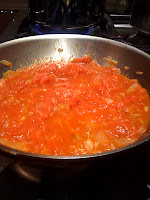 Apparently playing in the garden did inspire me to get my sorry butt back into the kitchen, but it didn't deter me from trashy television. I'd forgotten I had some fiddleheads in the fridge. Typically I have them cooked on a fire/grill in a foil pouch, but I thought I'd try something different. A quick google for inspiration later and I was set to make a tomato-fiddlehead pasta with balsamic vinegar.
I started with my basic tomato pasta sauce base - onion, garlic, salt, pepper, oil and canned tomatoes. I was shocked to discover that I had not one single can of diced tomatoes in the house. 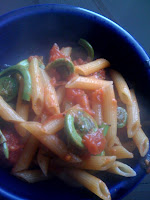 I've seriously neglected my pantry stocking as of late, guess it's time to get back on track. I did have whole plum tomatoes though, and I think they actually worked out better than what I'd originally envisioned.
I let the tomatoes, etc. cook down while the pasta water boiled. Then I added some balsamic, the fiddleheads and finished with a healthy dose of parmesan. A quick toss of pasta and I settled onto the couch with a springy, healthy dinner and blew through a few episodes of the ultimate early 90s smut-fest, Melrose Place. I just discovered the WHOLE series is streaming on Netflix. Yikes.
Posted by Green Peccadilloes at 7:10 PM