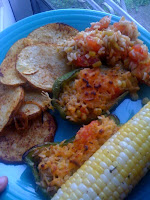 I still haven't been to the grocery store since we returned from our trip, and of course I didn't have the foresight to take any meat out of the freezer so I was really counting on yesterday's CSA share. I'm pretty thrilled with what I managed to come up with - it was like Iron Chef, except with multiple ingredients and only one cook. Ok, so it wasn't like Iron Chef at all.

Everything on this plate with the exception of rice, a touch of cheese, spices, olive oil and a can of New Mexico green chili from Trader Joe's came straight out of our CSA box or my garden. AND I managed to make a tasty, satisfying meat-free dish. Pardon me while I gloat a little bit, this was a big step for me. Really the big step was venturing into Western One's culinary territory all by myself - maybe he was just being nice, but I was insanely gratified when he didn't douse his plate with red pepper, black pepper and salt.


On the plate: Roasted anaheim peppers, stuffed with a mexican rice of sorts (fresh onion, corn, tomato, green chili and cilantro) and lightly broiled; a little extra rice on the side (the peppers were small); sliced red potatoes seasoned with chili powder; and fresh corn. Mybiggest mistake? Using the oven and broiler on a hot August day, but the Dos Equis helped that.

I'm curious to hear about others' CSA/farmers' market/garden adventures...
Posted by Green Peccadilloes at 9:03 AM