of seltzer, soda and soapboxes... 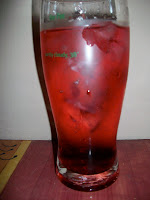 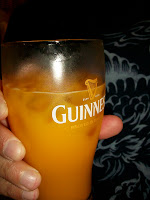 We rarely drink soda in our house. Occasionally Western One will drink strong ginger beer by the gallon, but as it's too spicy for me I rarely partake. Don't getme wrong, there are times when a cold soda tastes really good (like when I'm too hungover, um, tired for hot coffee) but for the most part I'd rather just have water. I'm thankful for my beverage preferences because it saves calories for beer and cheese and leaves space in my synthetic food limit for more satisfying indulgences.
We drink a lot of seltzer and lately have been accessorizing with a dash of fruit juice. Tonight Western One went for a more substantial beverage of half Mandarin seltzer and half mango puree, while I, nostalgic for my days in Ireland, opted for black currant juice. The brand name made me giggle...remember that show? 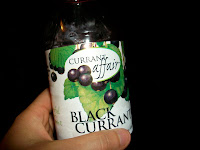 Anyway, this post is about more than "look at me, I drink seltzer, not soda." As most of you who have read Green Peccadilloes for some time know, I like to spend time thinking about food policy. In the interest of full disclosure, I spend a good bit of my workday thinking about health policy more generally, so this isn't a huge stretch. One proposal that has been kicking around New York for two budget cycles, and is gaining national steam, is the "soda tax." While ostensibly the concept makes sense, the way it has been approached, at least here, puts me right over the edge. The tax only applies to "sugary beverages" or, in other words - regular and NOT diet soda. The implication of course being that people should switch from one evil to another.
Now there is plenty of room for debate about this approach generally. It, like most consumption taxes, is regressive, but in a world where hunger and obesity paradoxically go hand in hand and it is cheaper to buy your kids 2 liters of soda than a gallon of milk, I'm not sure I have a problem with that. There's the free choice argument, but this certainly wouldn't be the first time we used the tax code to influence behavior, and it won't be the last. I understand that the objective correlation between calories in regular soda and obesity and related public health issues is an easier connection to make than similar issues associated with artificial sweeteners and other crap in diet soda, but to completely ignore the latter strikes me as ludicrous.
I'll get off my soapbox now, but I'm very interested in the thoughts you all have as I know I'm not the only one out there thinking about how to focus on good food...
Posted by Green Peccadilloes at 2:48 PM