No worse for the wear 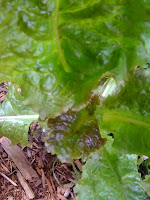 I had to count on mother nature to tend to my garden this week, as my work schedule barely allowed me to take care of myself let alone any other living thing.  Thank goodness for an army of help to keep Wonderpup entertained.  Upon inspection this morning, I was happy to see that things are plugging along but for my disappearing swiss chard.  The case of the disappearing chard has been building for a couple of weeks.  I planted five or six plants, which were slowly and meticulously raided by some OCD rodent.  The pillage was not haphazard in the least, but a calculated move from one plant to the next, sparing only my one remaining plant.  Nothing else has been touched - lettuce is fine, other veggies are fine, I swear the critter is just trying to mess with my head.  Other than that, things seem to be going alright it's already time to harvest some basil to keep the plants cranking and it's too early to say if I've killed my tomatoes or not yet!

Posted by Green Peccadilloes at 3:10 PM